In thinking this way I end up with the following:

You just learned the four main modes for the four different qualities, major, minor, dominant, and minor 7b5 (half diminished) seventh chords.

The oddity is Number 3, F Major for Bb Major or Major 7th. This is a very controversial subject that I will not go into here and is derived from the Lydian Concept of Tonal Organization by George Russell.

The fact is though that all the melodies and improvisations you play for Gm7 (Dorian mode) will sound real nice against Bb Major 7, and it sounds and feels really natural on the guitar. After using this for a while everything just falls into place as you will see.

All must be done in tempo, once you have memorized then, with a metronome. This will make your 8th notes even and condition your mind and mussels to play tempo's evenly. This develops technique or chops.
You must start at a tempo with the metronome where you can play the scale, with down up picking in the right hand, and never, ever make one mistake; otherwise you will only practice your mistakes and it will take twice as long to learn it correctly.
The goal would be to start around 72mm with 8th notes and 16th notes working up to 100mm then 112mm or more. 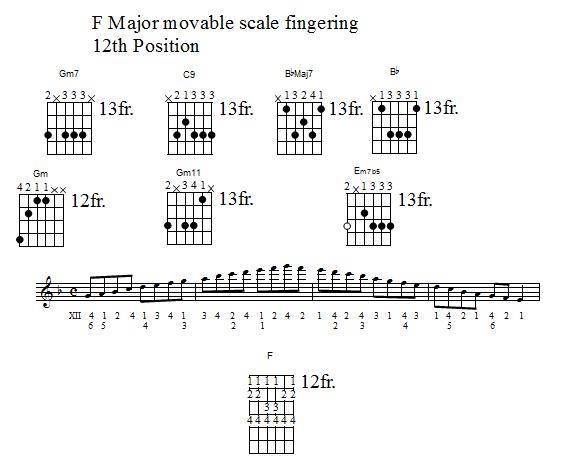 PRACTICE: The next step.
The above method is just to learn the fingerings. Playing the scales up and down can be very useful and will build technique, but... after learning the fingerings it makes more sense to practice melodic patterns that you will actually want to use at times as slow melodies or double time lines. It will teach your ear a more melodic approach to hearing in tempo while coordinating with your hands for automatic recall when just recalling the sound of a melodic line.

There are many different types of melodies constructed out of different types of intervals and patterns. I have particular types I like and you will find the same or your own. I will try to include some examples, but for now here are some sources of melodic ideas you could use to start with that I recommend.

Both can be found at http://www.chordmelody.com in the Jazz guitar books section and the Jazz guitar video section. Both are invaluable when it comes to building technique and melodic awareness at the same time.

ChrisGrey.com has been on the internet in the Yahoo directory since 2000.